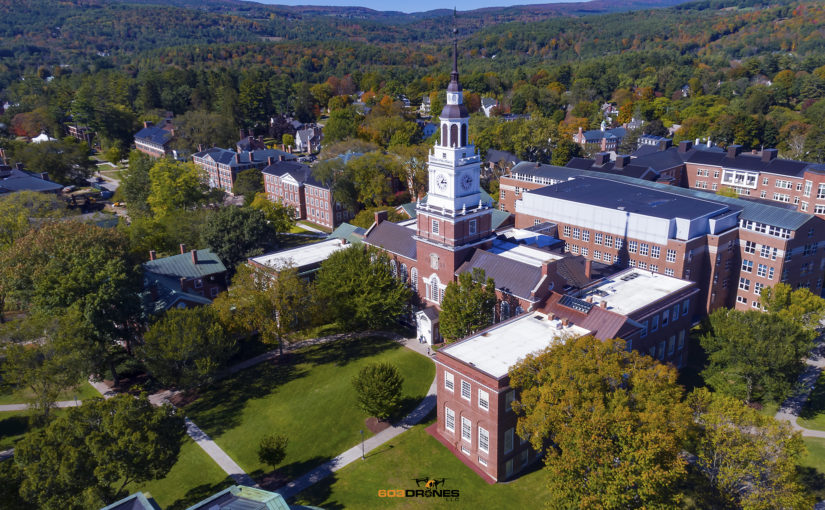 603 Drones, LLC was recently hired by a documentary film production unit to provide stock footage of the Dartmouth College campus in Hanover, New Hampshire. The production team wanted footage of the different historic buildings on the campus for use as transition and establishing shots in their film about one of the more famous Supreme Court Chief Justices, John Marshall.

Like many colleges and universities today, Dartmouth College has a policy prohibiting the use of drones on their campus without permission. Additionally, the campus lies just on the outer edge of the Class D airspace around the Lebanon Municipal Airport in a max 400′ altitude portion of the FAA’s UAS Facility Grid Map. And then, to make matters even more complicated, the Appalachian Trail – a designated National Park – runs East-to-West directly across the college campus. (For those who may not know, you cannot legally launch and land a drone in a National Park without prior permission.)

Once we had a signed client agreement in-hand, we got to work on securing the permission we needed from the college. Fortunately, thanks to our foresight back in 2018, we already hold a FAA Part 107.41 Wide Area Authorization for the Lebanon (KLEB) airspace so that part was easy. After some telephone and email conversations with the college’s Communications and Safety teams, we received the go-ahead to perform our mission on Saturday, October 5th.

When we arrived at the campus on the day of filming, we were a little disheartened to discover that it was significantly busier with pedestrian and vehicular traffic than we had anticipated. We soon learned that this was due to a reunion that was in town. Fortunately for us, we had arrived at the tail end of the event and the crowds quickly dispersed while we were setting up. After a quick call to the campus safety office to let them know we were on-site, we took flight and began capturing the footage we needed.

The entire experience – from the campus staff to the pedestrians to the curious questioners – ended up being a very positive one and we are thankful for the opportunity to perform this project for our client. We strongly believe that professionalism, preparation, and positive attitudes are just a few of the reasons that 603 Drones, LLC continues to earn the trust of our clients!

Jeremy Jones is the founder of 603 Media Group and 603 Drones, LLC. He is a FAA Part 107 pilot and has experience flying multiple Small Unmanned Aircraft System (sUAS) platforms in commercial applications. He is also versed in both state and federal regulations as they relate to commercial vs hobbyist sUAS operations and helps new remote pilots to navigate these very tricky subjects.
Twitter Facebook Linkedin
aerial cinematography dartmouth drone film videography

The USACE and Drones